Escaping to Anima City, Michiru experiences the 10-year anniversary festival and meets a crying wolf as a terrorist plot unfolds.

Michiru begins her escape to Anima City. She is confronted by a group of Beast Hunters and is fortunately saved by Marie Itami. They arrive at Anima City where the 10-year anniversary celebration is underway. Michiru meets a crying wolf and gets her wallet stolen. While pursuing the thief, she witnesses a terrorist plot unfolding. She is saved by the crying wolf who then confronts the terrorist group. A fight breaks out and the crying wolf defeats the terrorists. Michiru stops the crying wolf from causing more harm than necessary and discovers her tail powers.

Michiru attempts to withdraw money from an ATM before a group of thugs comes her away. The thugs vandalize a poster encouraging unity between Beastmen and Humans. Avoiding trouble, she hides in an air vent until the group walks away. Outside, a broadcast of the civil unrest against beastmen plays on a screen as Michiru blitzes past.

She reaches the bus station and hops atop the Route 66 bus as it is departing. The bus leaves the vicinity of the city and passes through a mountainous, coastal road. Feeling more relaxed, she takes the hood off her cloak and stretches out on the roof of the bus, gazing at the sea and Anima City City on the horizon.

Michiru powers on her phone and watches an Anima City advert on Facelook. Just as she's settling in for the ride, a motorcycle gang of beast hunters shoots two projectiles at Michiru, knocking her off the bus. Before impact, her tail rapidly expands and cushions her fall. The gang approaches her once again, but this time she dodges a few blows as she tries to run away from them. Michiru unfortunately falls off the guard rails she was running on and tumbles down the embankment below.

The bike gang eventually catches up and knocks her down. As a gang member is about to deliver the final blow, Mari interrupts the altercation and asks in a sassy tone for them to stop. She explains that she needs to protect Michiru for one of her clients. The gang doesn't listen and swings at Mari. Enraged, she and her two accomplices transform into their beastman forms. Her accomplices easily subdue the beast hunters and Mari explains to Michiru that she will escort her to Anima City. She demands payment for her services and Michiru begrudgingly hands over a wad of bills.

They board a boat and Michiru stares off into the distance at Animacity as she reminisces her life as a fugitive. The sunsets and the group arrives in Anima City. Michiru, nervous and on alert, glances around and sees a bright wolf figure on top of a nearby building. Suddenly the lights turn on and the 10-year Anima city festival begins. Mayor Rose gives a brief introduction from a large screen atop a scaffolding and the festivities are underway . Michiru explores the festival and bumps into a crying wolf who says emotionally that beastmen have waited 1,000 years for this moment before softly encouraging her to celebrate to the fullest. Confused and a little put off, she looks away for a brief moment and turns back to find the wolf disappears; she briefly ponders on who he is.

In a tower, PM Shiramizu congratulates Rose on the anniversary but gives a stern warning to keep the citizens under control. Back at the festival grounds, Mari meets Michiru and distracts her as a monkey steals her wallet and runs away. Michiru chases and loses the pickpocket underneath the scaffolding where the large screen is and witnesses a fox in a repairman's attire hastily leaving with a briefcase. She bumps into a pillar in frustration, only for an explosion to sound out and tip the scaffolding and screen off balance. As it's falling, Michiru frantically rushes to save an elderly goat in the scaffolding's path. In the last second, before the scaffolding fell on the two, the crying wolf from earlier pushes them clear of the scaffolding as the screen atop it shatters upon impact.

The crying wolf demands to know if Michiru is responsible of tampering with the scaffolding, to which she firmly denies and informs him that she witnessed a suspicious-looking fox sneaking away earlier. The wolf (now now longer crying) relaxes and smells the air, recreating the scene in his head before identifying the path of the fleeing culprit. Apologizing for his hasty accusations, the wolf follows the trail of the culprit into a nearby alleyway while the confused Michiru remembers to continue her pursuit of the pickpocket. Along the way the two are both interrupted by a large explosion in the city which the wolf was in the vicinity of, a concerned and worried Michiru decides to head there; abandoning her pursuit of the pickpocket for the moment.

At the scene of the explosion, the culprit fox mocks on how he trapped his pursuer with a scentless bomb; gloating about its effectiveness. Suddenly, his leg is grabbed by a hand from underneath some wreckage; surprising the fox before he is promptly thrown up against an alley apartment air conditioner and then falling onto a dumpster. Bursting from the debris, the completely unharmed (yet annoyed) wolf rises to face the culprit who. As the wolf demands the now frightened fox why he ruined the Animacity festival, the culprit flees to the end of the ally where a truck is waiting for him; knocking on its backdoor. A lion and a deer buck beastman carrying guns suddenly explode out the back the truck, coming to the fox's aid while raining a sea of bullets on the wolf. As they continue their assault, the lion expressing excitement at the challenge while the deer addresses the fox as their leader: Satou. When the wolf jumps higher in the ally to evade their fire, the deer asks how Satou's trap failed to kill the wolf while the on-edge fox warns his fellow terrorists to be careful seems unnatural to have survived his best bomb. The wolf, having narrowly narrowly escapes the enemy's fire, notes that the culprits are professionals. He smells the air around his enemy once again to get a better idea of who they are and discovers the scent of humans on the culprits.

The now enraged wolf exclaims the terrorists were hired by humans, noting that such a strong human scent cannot be hid. The terrorists confirm this while resuming their assault and retorting that contract work is still contract work to them regardless of who hires them. The disgusted wolf proceeds to criticize and overpower the terrorists, expressing his utter disdain on the hypocrisy of beastmen working with beastmen hating humans while also swearing to make them suffer for their actions. Backed into a corner, the lion and deer of the terrorists declare their intent to fight back as they unleash their true power as beastmen to grow massively in size and strength (the lion's claws especially becoming longer and sharper while the deer's antlers in particular become taller and sharp). The wolf, declaring that hew views them as unworthy of his fangs or claws and that his own two fists are enough, is still able to subdue the two with a serious beating (finishing them off by tearing off the deer's antlers and then blinding the lion's eyes with them before smashing them together). Right when Michiru appears at the scene, awed by the sight of strength, Satou recovers from his own beating and grabs a hold of her as a hostage and holds a knife to her throat; frantically demanding to be allowed escape or else he will take Michiru's life. Unfazed, the disgusted wolf jumps behind the shocked terrorist and briefly mocks him before repeatedly (and mercilessly) beating him down; saving Michiru.

Michiru calls the wolf to stop as the threat is averted and further violence is not necessary. The wolf curtly disagrees and says that the terrorists ruined the festival on orders by humans which is something he cannot forgive. He continues his ruthless beat-down of the terrorist once more, but Michiru cries out for him to stop and her tail begins to glow and expand. The tail knocks the wolf back. After both express shock, both begin to debate once more; this time Michiru defends humanity and exclaims that she is human too. Unconvinced, the wolf sarcastically remarks on her beastman appearance.

Michiru at the 10-years anniversary celebration 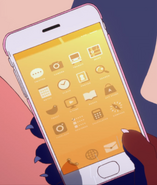 The home screen of her old phone

Marie distracting Michiru so that the pickpocket may steal her wallet

Episode 1 Shishiki
Add a photo to this gallery