Michiru investigates the bombing at the Medical Center and uncovers the truth behind the plot and other similar attempts.

The Medical Center is at the center of a bombing plot in Anima City. An explosion occurs in the tower and Shirou and Michiru head over to investigate. They discover Chief Yaba orchestrated the attacks in an effort to destroy evidence of embezzling money with the Flip Gang. Yaba and his accomplices are apprehended and confess to the crimes.

The episode opens with a truck with a timed explosive attached to the undercarriage detonating on a freeway in the outskirts of the city.

The next morning, Shirou sits at his study and smells Michiru's ID card. He observes flashbacks into her past, stretching all the way back to her accident and injury as well as a game-winning shot during a basketball game. Nazuna is seen cheering in the bleachers. In the next memory, Nazuna happily tells Michiru she got the audition. Michiru congratulates her, but Nazuna suddenly transforms into a beastman. She gets taken away, and in the following scene, Michiru transforms into one as well. Michiru hides away in her room tucked under her blanket as a beastman. She stumbles upon a website advertising Anima City, and she writes a letter to her parents that she will go live in Anima City.

Michiru wakes up to Gem crowing in his beastman form on the rooftop. Michiru asks about a trident-looking building in the distance, which is revealed to be a medical facility managed by Sylvasta Pharmaceuticals. It sports both a laboratory and hospital inside. Just as Michiru plans to visit there to look for a cure, Shirou drags her back into the storage room and traps her in the room. He's finally accepted Michiru is a human. He doesn't want to start a panic if more people find our her true identity.

Suddenly, Mayor Rose steps foot into the residence and interrupts the two. The Mayor has come to deliver the news of a threat letter sent to Sylvasta. It is revealed that the vehicle explosion was a truck loaded with Sylvasta medicine. Michiru tries to eavesdrop the conversation when her ear elongates into a bunny ear. Apparently, the message in the letter argued that money spent building state-of-the-art beastman medical facilities should go towards saving humans. The police couldn't find any trace of smell to identify the explosives, so Rose personally visited Shirou for his help. Shirou agrees to aid in the search for explosives. Michiru realizes that she won't be able to find the cure if the hospital is bombed, so she yells for help to the mayor to free her. Rose doesn't hear her, so Michiru transforms into a rooster and bellows for help. She is freed and accuses Shirou of holding her hostage. Rose greets Michiru and tells her she's become a fine beastman.

Michiru pleads to Rose for permission to aid in the search effort. Rose gives the green light. The three promise to keep the secret of Michiru's origin in exchange that Michiru drop the hostage allegations. Michiru begrudgingly accepts the terms and is handed a smartphone while Shirou is handed the bomb fragments.

While gazing at the Silvasta building outside, Shirou begins to tell Michiru the background of the company. Sylvasta Pharmaceuticals is part of the larger Silvasta Conglomerate which has worldwide influence. The mayor was pressured to saying humans and beastman have the same rights so the city could secure large funding from companies like Silvasta. There are rumors that Silvasta Pharmaceuticals is profiting off of beastman data.

Shirou sniffs the bomb fragments and is able to locate all the bombs hidden in the buildings downtown. He notifies the bomb squad that there are 6 bombs and directs Michiru to head towards the medical facility. He reasons that the true target of the bombers is the Medical Center. The task force is underway.

Yuji leads the bomb squad to disarm the six bombs while Michiru sneaks into the Medical Center. In a parking garage, Kusakabe and a group of people discuss keeping a device cold and diverting away police attention. Michiru eavesdrops behind the truck, but her ears accidentally extend again. Kusakabe catches sight of Michiru and proceeds to chase her. Another scientist recognizes Michiru from the past. While running away, Michiru dials Shirou but there's no response. The suspecting scientist concludes she's the same student they knew. Kusakabe and his lackeys corner Michiru, but Shirou saves the day yet again. Kuro ended up notifying and briefing Shirou on the situation. Apparently the gang and medical staff were sneaking in supplies.

An explosion goes off in the Medical Center tower. Shirou forbids Michiru to head towards the tower. Feeling clever, Michiru claims that she's a beastman now, and Shirou is obligated to protect her since he vowed to protect all beastmen in the past. Shirou laughs and lets her tag along. They arrive at the explosion site and meet Mr. Yaba, the Medical Center Chief and Yuji. Yaba allows them to investigate, but Shirou smells no traces of the explosive.

The suspecting scientist earlier notifies Mr. Yaba that Michiru is the same schoolgirl they knew from the past. Suddenly, the President of Sylvasta, Alan Sylvasta, calls the Chief who explains the situation. The research data management section was blown up but because the hospital's data is hosted offsite, it's safe. Alan is pleased and tells the chief to restore the damaged section completely and remove all traces of the incident. Alan ends the call mildly annoyed at the inconvenience.

Shirou, Michiru, and Yuji reach the office of the chief. Shirou says the only way to remove all the scent of the explosive is to use a chemical to do so, likely produced at the medical facility. Michiru also points out that the gang was cooperating with medical staff earlier. Shirou concludes that the chief exploded the lab to destroy all evidence. Because all beastmen leave a residual scent and the chief has no scent coming from his hands, he is the prime suspect for the bombing. Yuji holds out a document stating Shirou's smelling skills are admissible evidence under the provisions of the Special Beastman Territory. They move in to arrest Yaba who transforms into a rhinoceros beastman to fight. Mimura, a chameleon beastman materializes behind Michiru and restrains her. Yaba and Mimura escape with Michiru a hostage. Shirou reaches Yaba and the two brawl. The altercation ends with Shirou crushing Yaba's horn.

Outside on the rooftop, there is a standstill between Mimura and the cops. Mimura is threatening to drop Michiru off the building if he doesn't receive the helicopter he requested. Kuro tries to intervene but fails. Michiru frees herself from the beastman but falls off the building in the process. Shirou jumps and catches Michiru, protecting her from the fall. Michiru thanks Shirou who responds he will protect all beastmen.

Later at the residence, Rose reveals that Yaba and Mimura confessed to blowing up the Medical Center's data system after finding out the higher-ups were aware of their embezzlement schemes. Shirou promises he won't lock Michiru up anymore and Rose stated she will search for a treatment for her. It is revealed that Rose has the first Ph.D. in researching beastmen genetics. Rose continues that while she's a politician, her partnership with Silvasta may help too. Shirou warns that Silvasta Pharm feels suspicious because his nose is telling him so.

In an unknown facility, Alan announces that the research at the location will be terminated. He will be heading to Anima City to see the city for himself. 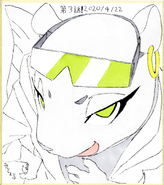 Episode 3 Shishiki
Add a photo to this gallery