Michiru travels to Rabbit Town to look for her wallet and meets Gram Grandma, who has a small favor to ask.

Melissa and Gem Horner welcome Michiru to their home. A test concludes that she is indeed a beastman. The next day, Michiru heads to Rabbit Town in search of her wallet. She meets with Gram Grandma, who asks for her to teach the kids in return for the wallet. As she teaches the kids writing, Shirou is investigating a gang case related to Gram Grandma. The two storylines come to a head when Michiru and the kids are caged to be sold off. Michiru saves the day and Shirou stops Grandma's lackeys. The police arrest Grandma and her accomplices.

Michiru insists that she's human but Shirou doesn't believe her, using her appearance as irrefutable evidence she's a tanuki. The cops arrive and find the three festival terrorists bound with a note. The police detective Yuji Tachiki sighs realizing Shirou arrived at the scene before them. Further away, Shirou transforms back into his human form. Michiru is shocked and flustered believing he would be a lot older. She tries but is still unable to transform back to a human again. The festival ends, and all of the citizens turn back to their human form as well. Michiru is frustrated that she can't.

Shirou takes Michiru to Gem Horner's house. Gem uses a beastmen marker on Michiru to test if she is a Beastman. The marker turns blue confirming that she in fact is. She's frustrated again and insists that she was a normal human a year ago. Michiru asks if there exists a disease that turns human into beastmen but they both say it's improbable, to her disappointment. Gem breaks the silence by recommending Michiru to get a psychiatric evaluation. Displeased, Michiru lashes out at Gem until Gem's wife Melissa scolds him for being disrespectful. Melissa apologizes and introduces herself and Gem to Michiru. Gem is the Director of the Beastmen Life Association, a social group to help beastman newcomers with their complications. She hands a registration form but Michiru is not pleased. As a last resort, she decides to use her student ID card to prove that she's human, quickly realizing that her wallet got stolen during the festival.

It's rare for lost and stolen items to be recovered in Anima City and Michiru is distraught hearing this. Melissa concludes the conversation and shows Michiru to an empty storage room. She pulls out a cot and offers that Michiru stay the night. Michiru, having lived homeless, quickly accepts the humble accommodations. Kuro, Shirou's crow, swoops in through the door crack, collides then lands on an unsuspecting Michiru. Shirou quickly calls the crow back and flatly tells Michiru to sleep soon for an early schedule tomorrow. Melissa apologizes for Shirou's blunt behavior and introduces him to Michiru who's only just learned his name. Hearing his surname Ogami reminded her of the shiny wolf she saw earlier in the night.

Morning of the next day, Shirou and Michiru arrive at the city council where a long line has formed. Shirou announces that he will be leaving and was only informed to guide her to the location, not wait with her. A fight breaks out in the line to Michiru's surprise. Shirou, unwavering, tells her that the strong win in the beastman society. The city isn't living up to Michiru's prior expectations. She spots a short man in a hoodie sneaking about and decides to tail him. Mayor Rose meets with Shirou in her office and the two debrief on the terrorism incident yesterday. Both are disappointed beastmen would resort to such heinous acts for money. Rose ends the discussion by giving one last request to Shirou.

Michiru catches the short man in the hoodie who denies stealing her wallet. Marie interrupts the altercation and the man in the hoodie gets away again. Michiru finally catches on that Mari was an accomplice to the wallet theft. Mari lackadaisically denies the claim and reminds Michiru that she helped smuggle her yesterday. Mari tells Michiru to meet Gram Grandma in Rabbit Town to find her lost wallet.

Michiru reaches Rabbit Town and is confronted by Grandma's lackeys. They take her to Grandma's, but are on edge because Michiru staying in beast form is a sign of aggression in the gang world. Michiru tries to correct the misunderstanding and tells them her situation, but neither Grandma or her lackeys believe her. Eventually, Grandma reveals Michiru's wallet. She confirms with Michiru that she's a student and asks Michiru to teach a class of children in exchange for her wallet. Upon arriving in the classroom, Grandma tells Michiru that all these children were betrayed by men just like how she and the others were too. They don't have anywhere to go so they end up living a dangerous life in Rabbit Town. Michiru agrees to teach the kids reading and writing. She shows the class how to write her name, as well as Youta, a fellow student's name, too. Youta proceeds to write his name on the board and the rest of the class want to participate as well.

Meanwhile, Shirou is outside the classroom scoping the area and notices a suspicious car pull up to the building. A young man in a blue suit steps out the car and comments that the place reeks of women. Unbeknownst of the unfolding situation, Michiru continues to teach the children. One of the children is drawing a picture of a silver wolf, known as Ginrou, the god of beastmen. The kids tell Michiru that a silver wolf will come to the rescue for beastmen during times of need. Michiru is reminded by the shiny wolf from yesterday and gazes out the window, catching a momentary glimpse of Shirou.

Kusakabe, the man in the blue suit, meets with the Grandma for business. In reality, he came to get money from Grandma. She tells him it's not ready yet to his dismay. Kusakabe begins insulting the women and nearly breaks into a brawl with Grandma's lackey before Giuliano Flip, the boss, steps in. Flip asks for the money and Grandma reiterates she doesn't have it. Flip brings up the fact that Grandma is in possession of new animals she can turn over for money. Such information had already become widespread and known even among mayors, to Grandma's shock and frustration. Shirou eavesdrops on the conversation outside the window and leaves.

Night falls, and Michiru and the children are trapped in a caged shipping container at a port. She asks Grandma what the meaning of all this was before realizing Grandma intended to traffick the kids for profit as well as traffik Michiru herself since she is a witness. Michiru exclaims that it's blasphemy she's trafficking her kids, to which Grandma replies the 'weak have to step over the weaker to survive'. The container begins to move and the kids cry for Ginrou's help. Michiru decides to take the situation in her own hands and enlarges her tail, causing the container to swing back and forth under the crane. The operator responds by shortening the cable closing the distance between the container and the crane control room. Michiru uses her stretchy powers to reach inside the control room and begins violently jerking the crane back and forth. Eventually, the crane gives away and falls to the ground. Michiru envelops everyone with her tail powers and the party arrives safely on the ground.

Michiru and the children proceed to run away but she's stopped by one of Grandma's lackeys (Cheetah). The lackey chokes Michiru out, but just as she's about to pass out, Shirou jumps in to intervene. Right before she passes out, Michiru sees a silhouette of a wolf and suspects it's Ginrou. Shirou easily subdues the lackeys while Grandma nonchalantly surrenders. The police arrive a short while later and thank Shirou for intervening before it was too late. Shirou tells the officer it was a request from the Mayor herself. Concerned for the children, Michiru returns to the scene and the officer said they will be taken care of at an orphanage in the city. Michiru reprimands Grandma for selling the children. Grandma smirks and says Michiru is not a beastman because she would be too optimistic as a woman in their society. Grandma throws the wallet back to Michiru and boards the police transport which soon departs. Michiru confronts Shirou for not saving her and the children earlier in the day but he didn't have enough evidence to warrant an arrest. She refuses his answer and begins to cry, anguished at the possibility she and they would've been shipped away. Shirou reaffirms his promise to save all beastwomen and children. The episode ends with Michiru flashing her ID as proof of her humanity then denouncing beastmen and their culture, promising to find a cure and leave the city. 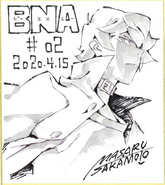 Episode 2 Shishiki
Add a photo to this gallery