Nina Flip (ニナ・フリップ, Nina Furippu) is a supporting character in BNA: Brand New Animal. She is the daughter of Giuliano Flip and a dolphin Beastman. She is a junior high school student.

In her human form, Nina has a tan complexion, large turquoise eyes, aqua eyebrows, long aqua hair pulled into a ponytail, and wears pink lipstick. She wears a white halter top dress with a pink ribbon around the waist and blue slip-on heels.

In her dolphin form, her arms become flippers, her legs become a dolphin tail, and she also grows a dorsal fin. Her skin turns light blue with a white underbelly, and her eyes widen, turning completely blue. She retains her dress and hair.

Nina is bubbly, extroverted, and a little naive. She dreams about living as a human in the mainland, and therefore illicitly uses human social media and listens to human music. Nina thrives at the party meeting new people and happily shows off her beastman form.

Nina and Michiru meet by coincidence at the park while Nina was filming a Livestream. Nina is happy to know humans were watching her. Michiru is unbound and asks about her father. Nina denounces him and explains that according to her father, her grandpa was caught and eaten by humans, or says her dad, though she doesn't believe him.

Upon finding out Nina was listening to human music, Flip forbade her from leaving the house. Nina then shows Michiru a box of knick-knacks, among them a single earbud. Michiru thinks back at the time Nazuna and her used to listen to Night Running together. Nina asks Michiru if she wants to go back, but she replies she can't when she looks like this. Michiru says she wants to go back. Sparks fly, and she suddenly turns back into a human. Michiru is elated.

They both go to the beach as the sun sets. Nina says a girl named Lisa from Facelook invited her to a party in the mainland. Michiru agrees to go. Flip returns home and with some presents for Nina, but she's nowhere to be seen. The bodyguard does a full cowing and apologizes.

Night falls and finally arrive at the mainland. A bike cop passes them not suspecting a thing. They reach the party where people in masks are dancing to EDM. Night Running begins playing and Michiru reminisces her memories with Nazuna again. Nina interrupts her and asks if she's okay. Lisa walks up and greets Nina. Nina is elated and jumps but accidentally turns into a dolphin. Lisa is surprised she's a beastman, but doesn't react negatively. Nina and Michiru are both shocked at the reaction. Lisa introduces Nina as the special guest for the beastman themed party they were having.

Meanwhile, at the party, everyone is cheering Nina at the pool. Michiru wants to go home because she feels something is off. Nina takes this wrongly and thinks it's because she's the popular one at the party and refuses to go home. When Michiru walks out of the bathroom, Nina is trapped in a tank and is about to suffocate. It turns out that Lisa had placed her in because she thought all dolphins needed water to breathe, not knowing that dolphins are mammals and cannot breathe underwater. Michiru transforms back into her beast form and punches through the glass tan with her Gorilla Punch. Nina coughs and is finally able to breathe. Michiru says it's time to go home, and Nina nods in agreement. Lisa is out of words. The group departs the mainland on Marie's boat.

Giuliano is an overprotective father to Nina Flip whom he loves dearly. Giuliano often spoils her with a mountain of gifts when he comes back home. He is however a strict parent and bans Nina from leaving the house when he found out she was listening to human music. She despises her father when he's around.

After finding out Michiru is from the mainland, Nina became very excited and started asking her question about humans. During their conversations, the two have developed a friendship. When Michiru noticed Nina was in danger of drowning, she used her powers to smash the tank Nina was in, and together the two leave the party. Despite how Nina's first time on the mainland ended, she and Michiru are still friends.

Lisa is a girl whom Nina met on Facelook. When Nina accidentally showed her dolphin form to Lisa at the latter's party, Lisa was instead excited and introduced her as a guest of honor. Nonetheless, Nina later found out that Lisa was ignorant about her needs due to Lisa ignorantly trapping her inside a tank under the assumption of all marine animals require water to breathe. She decided to leave Lisa behind and returned to Anima City upon realizing that Lisa was a shallow person. 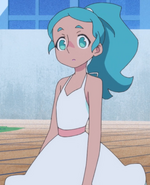 Retrieved from "https://brand-new-animal.fandom.com/wiki/Nina_Flip?oldid=6192"
Community content is available under CC-BY-SA unless otherwise noted.