Marie Itami (マリー伊丹, Marī Itami) is a character in the BNA: Brand New Animal series by Studio Trigger. She is a Mink Beastman and is well-connected and rooted in the society and culture of Anima City. She comes to Michiru's aid in several instances and helps Michiru acclimate to life in Anima City. Marie is a mink but gets confused for a weasel or a mongoose.

In her human form, she has a brown skin tone, lavender dreadlocks, and green eyes. She sports a dark gray sweater, light gray hooded overcoat, brown belt, and blue skinny jeans tapered at the end, and black high-heeled boots. For accessories, she dons a pair of green visor sunglasses over her forehead and gold hoop earrings.

In her mink form, she has a longer, broader neck, a square face with small outward-facing ears perched atop her head. She grows claws on her hands and a long, bushy tail in the back. Her clothes remain the same in both forms.

Marie's personality is very sly, cunning, opportunistic, and greedy, and always finds a way to repay back when she does favors for to other people. She seems to be very Machiavellian in nature, often forsaking relationships and connections as a means to an end to reach a goal, usually to the detriment of her peers. She is driven by greed and money as an incentive. In the case of smuggling Michiru to the city, she only agreed to the task when guaranteed monetary compensation from both her client and Michiru. Despite being compensated by Michiru, Marie still abets the theft of her wallet.

Despite all this, she does seem to have a good heart. She comes to aid Michiru during times of need and helps guide her through the harsh society of Anima City. Like a tough parent, she lets Michiru learn bitter lessons the hard way but in the end, Michiru adapts for the better. She was indispensable in Michiru's process of acclimating to the city.

Marie along with two partners depart Anima City for the mainland in search of Michiru. Marie stumbles upon a biker gang harassing Michiru. She interrupts the altercation and asks in a sassy tone for them to stop. She explains that she needs to protect Michiru for one of her clients. The gang doesn't listen and swings at Marie. Enraged, she and her two accomplices transform into their beastman forms. Her accomplices easily subdue the beast hunters and Marie explains to Michiru that she will escort her to Anima City. She demands payment for her services and Michiru begrudgingly hands over a wad of bills.

They board a boat and Michiru stares off into the distance at Anima City as she reminisces her life as a fugitive. The sun sets and the group arrive in Anima City. Michiru, nervous and on alert, glances around and sees a bright wolf figure on top of a nearby building. Suddenly the lights turn on and the 10-year Anima City Festival begins. Chairman Rose gives a brief introduction and the festivities are underway. Michiru explores the festival and bumps into Marie, who distracts her as a monkey steals the wallet and runs away.

Just as Michiru is about to catch the beastman who stole her wallet, Marie interrupts the altercation and the thief gets away. Michiru finally catches on that Marie was an accomplice to the wallet theft. Marie lackadaisically denies the claim and reminds Michiru that she helped smuggle her yesterday. Marie tells Michiru to meet Gram Grandma in Rabbit Town to find her lost wallet.

Marie shows Michiru a suitcase filled with illegal phones that can bypass the Anima City Firewall. When she offered Michiru a SIM card for 50% off, she accepted and told Marie to put it on Shirou's tab.

As Michiru watches a baseball game and calls out a flamingo for throwing knives from under her wing, she gets harassed by three more flamingo beastman. Marie appears behind her and before Michiru can even speak Marie reminds her harshly that she is a Mink and not a Weasel. Marie then tells Michiru about how beastman baseball works and how its about winning, losing, living, and dying as to which Michiru exclaims that it's insane.

While walking with Shirou and reminiscing about Nazuna, Michiru didn't notice that Shirou left and Marie arrived. She gave Michiru this month's phone bill, which is 500,000 yen. Marie offers that Michiru earn the money by selling an overpriced product to the beastmen in the Slums.

Marie was one of the people that helped Michiru save the city. She was first seen with Jackie and Nazuna trying to escape with them from Boris Cliff but got cornered by him, until Michiru came to the rescue. She then howled with the rest of the beastmen citizens that night. After the chaos, Marie was seen selling Nazuna-themed merchandises for profit. 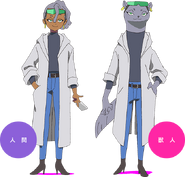 Add a photo to this gallery
Retrieved from "https://brand-new-animal.fandom.com/wiki/Marie_Itami?oldid=6199"
Community content is available under CC-BY-SA unless otherwise noted.