Boss of The Family

Guiliano Flip (ジュリアーノ・フリップ, Juriāno Furippu) is a supporting character in BNA: Brand New Animal. He is the boss of The Family, a mafia gang in the Anima City underworld. He is a beluga whale Beastman.

In his human form, Giuliano a large, well-built body with broad shoulders, large traps, a wide, bald head, and sullen eyes. He wears a black suit and tie, a white collared shirt, and black shoes plus a occasional fedora.

In his beluga whale form, he has white skin and a tail, and still wears the same outfit while retaining legs.

He is ruthless and brutal, with a commanding presence. He is also a man of few words, but his mere demeanor alone is able to intimidate his associates. He isn't afraid to kill his underlings if they fail to complete their assigned task. He also despises humans and was about to go to war with them when his daughter escaped.

Although mostly a rough criminal, Giuliano also has a sweet and caring side. He is overprotective of his daughter, Nina Flip, who he loves dearly. Giuliano often spoils her with a mountain of gifts when he comes back home. He is however a strict parent and bans Nina from leaving the house when he found out she was listening to human music.

Giuliano personally visits Gram Grandma to seek the money she owed. Apparently he doesn't usually visit because Grandma was shocked at his arrival. He suggests that Grandma sell her children and she begrudgingly agrees to the plan.

After the bombing incident, Giuliano interrogates Kusakabe and reprimands him for failing his duty and letting Shirou foil the plot. Shirou arrives at the scene and before he is able to act, Giuliano brutally murders Kusakabe. A while later, Giuliano returns home with a huge pile of presents to give to Nina. He finds out that Nina had escaped and is visibly upset. Giuliano prepares to personally bring his daughter back and assembles a group of his men to visit the city. Shirou stops him in time and promises to return them by midnight.

He was then seen as he helps Michiru, Shirou, Nazuna, and Marie to defend the city from rampaging beastman and these bots that are armed with a vaccine that will permanently transform him and any of his cronies into humans.[1]

He cares about his daughter very much as a parent, but dislikes her from getting in touch with things associated to the human world.

He regards Shirou as a rival and nuisance. However, he later casts aside his disdain in order to protect Anima City and even offers his help. 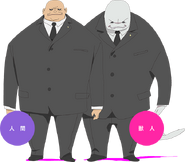 Retrieved from "https://brand-new-animal.fandom.com/wiki/Giuliano_Flip?oldid=6325"
Community content is available under CC-BY-SA unless otherwise noted.