Ginrou (銀狼, Ginrō, "Silver Wolf") is a mythical Beastman with the appearance of a silver wolf. He comes to the aid of beastmen during times of crisis.

There are three individuals who bear Ginrou pseudonym; the first and original Ginrou Shirou Ogami, the second "false" Ginrou Nazuna aka. Déesse Louve who impersonates the original for Silver Wolf Order and the 3rd Ginrou Alan Sylvasta who's a true blood beastman.[1]

Ginrou is revered and worshiped by many in Anima City, and even has a religious cult, Silver Wolf Order. It is told in tales that Ginrou will save beastmen during times of need. The special thing about Ginrou is that he is in full beast form as well as shapeshifts parts of his body into a weapon or forming wings for flight, something normal beastmen can't transform into.

The mythology of Ginrou began a thousand years ago. Beastmen at the time lived in isolation from humans but kept entering crisis after crisis. One day, a savior came in the form of a silver wolf, Ginrou. Ever since that day, the beastmen were able to thrive with the help of Ginrou. Gradually the faith grew up until the present day when most beastmen treat Ginrou as a God.[2]

Sometime prior to the present, a pureblood beastman, Alan Sylvasta, underwent a transcendence ritual and attained his own Ginrou form.

In the current day, many beastmen still believe in Ginrou. Children still tell tales about him while many older residents of Anima City worship and revere him.[3] Gem Horner has also authored a picture book about Ginrou called the Tale of the Silver Wolf. However, some beastmen, like the residents in the Slums, view the mythology as a children's story.[2]

Melissa Horner actively worships and reveres Ginrou. She believes that Ginrou is omniscient and is aware of all good and bad deeds of beastmen, like Gem leaving feathers in the shower. She keeps a shrine of Ginrou in the Beastman Co-op and carries Ginrou offerings with her whenever she leaves the house. The offerings look like strips of cured meat wrapped up in a leaf as a package. She hands them to Shirou and Michiru before they leave the house.[2]

A silver wolf appears when Michiru first enters Anima City. It is confirmed the silver wolf is Shirou in his Ginrou form.[4]

During Silver Wolf Order's campaign at Anima City, the cult brings a guru named Deesse Louve aka. Nazuna whom they claimed to be Ginrou. While Deesse Louve justified her decision to impersonate the wolf god to bring hope to citizens of the city, she herself unaware that her predecessor is still alive until near the conclusion of Nirvasyl Syndrome she unwittingly caused thanks to Alan's machinations. Nazuna eventually meets Shirou, the first Ginrou, when they banded together to pacify affected beastmen. [5][6]

When Alan unveils his own Ginrou form, Shirou is initially unable to beat him in combat and seemingly killed. However, his desire to help his brethren, coupled with encouragement from his deceased fellow Nirvasyl citizens whose souls resided within his very being, eventually helps the first Ginrou to defeat his false counterpart and subsequently, saves Anima City from destruction.

Shirou Ogami
The original Ginrou, Shirou Ogami, appears as cyan and white giant wolf with protrusions on the shoulder surrounded by fiery blue aura as with common depiction of Ginrou. In addition of immortality, enhanced strength, speed, durability, sense of smell, and the gift of psychometry (which accessible in his basic wolf form), Shirou can generate destructive sonic roar, able to form wings for flight or blades to combat his enemies, and can soothe beastmen with his howl regardless whether they are succumbed to Nirvasyl Syndrome.

It must be noted that despite his fateful transcendence, Shirou is still susceptible to Nirvasyl syndrome if his trauma is being evoked and causes him to suffer high stress. Although, this no longer an issue after Michiru unintentionally cured him with her mutated blood.

Add a photo to this gallery
Nazuna Hiwatashi
As Ginrou, Nazuna's wolf form greatly resemble that of Shirou's except she lacked the latter's shoulder protrusions and retains her human self's hairstyle. Another difference includes golden eyes and three red markings on the forehead. Since she attained this form through her enhanced shapeshifting abilities thanks to her human-turned beastman physiology however, her overall abilities might pale in comparison of Shirou despite potentially able to overcome it through unique abilities exclusive to hers, which she chose not to explore after stopped assuming such form due to no longer wanted to further Silver Wolf Cult's cause.

Add a photo to this gallery
Alan Sylvasta
Alan Sylvasta's Ginrou form radically different to his predecessors, as he takes the appearance of a massive cerberus which each heads retain facial features of his beastmen form's visage, three feather-like protrusions on his forelimbs and golden aura. Nevertheless, he shares same powers and abilities of Shirou's albeit somewhat inferior due to lack of souls that powered his very being and can still easily succumb to the Nirvasyl Syndrome as Shirou discovered and exploited in their final battle. 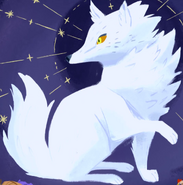 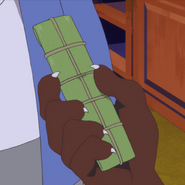 Ginrou appearing in Tale of the Silver Wolf

Inside a Ginrou offering
Add a photo to this gallery

Retrieved from "https://brand-new-animal.fandom.com/wiki/Ginrou?oldid=5880"
Community content is available under CC-BY-SA unless otherwise noted.