Barbara Rose (バルバレイ・ロゼ, Barubarei Roze), formerly named Natalia, is a main character in BNA: Brand New Animal. She is the mayor and founder of Anima City and a naked mole-rat Beastman.

In her human form, she has a tan complexion, bald head with forehead wrinkles, red eyes, pointy ears, and a pointy chin. In her beastman form, she has a salmon complexion, wide face, forehead wrinkles, flat ears, and a long neck. She has the same outfit in both forms and wears a dark brown tunic, matching boots, and carries a silver cane with a red end.

She is intelligent and has a gentle personality underneath her serious exterior. Knowing that Michiru is a human, she keeps Michiru and Shirou under surveillance and is concerned about them.

Barbara has a Ph.D. in Beastman genetics and is a long-time acquaintance of Shirou, who rescued her from a research facility when she was a child. She gave up her life in academia to pursue a career in politics.

Barbara worked closely with Prime Minister Shiramizu to establish the Beastman Special Zone and Anima City. She also has close ties with Sylvasta Pharmaceuticals who was the major sponsor in the development of the city.

This section is a stub. You can help the Brand New Animal Wiki by expanding it.

Before the establishment of Anima City, Barbara and Shirou used to travel around the globe to help the beastmen in need.

Barbara and Shirou together stop terrorist acts throughout Anima City. She is aware of the true identity of Michiru and pledges to help find a cure for Michiru.

This section is a stub. You can help the Brand New Animal Wiki by expanding it.

Barbara was a child when Shirou rescued her from a research facility. She then became his student in helping and protecting other Beastmen. She is normally on good terms with him.

"Since the passing of the Special Beastman Ward Autonomy Act, Anima City has been developed as a place where beastmen can live truly to themselves."[1]

"10 years have passed since the founding of Anima City, yet the rift between humans and beastmen remain as wide as ever. Even so, this city continues to be a place of respite for beastmen. For the past 10 years, and for the 10 ahead. No, for the future that lies even further ahead. Let us celebrate the anniversary for all of us!"[1] 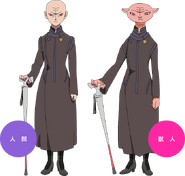 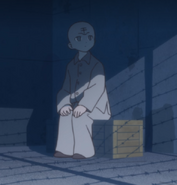