BNA Zero - Beasts That Can't Become Even Better (ビー・エヌ・エー・ゼロ まっさらになれない獣たち bī enu ē zero massarani narenai kemono-tachi) is a light novel set in the world of Anima City before the events of the BNA: Brand New Animal anime series. The novel is written by Nekise Ise and released on April 23, 2020.

Long before Anima City was established, the story follows a younger Shirou and Natalia (Barbara) as they travel the world, helping animal people, revealing in the process the source of Shirou's hatred for humans.[1]

BNA is a prequel set many years before the main anime story. Long before Anima City was established, the story follows a younger Shirou and Natalia (Barbara Rose) as they travel the world, helping beastmen. The novel promises to reveal the source of Shirou's hatred for humans.

The prologue chapter is from Shirou's point of view. Shirou says there have been two times in his life he's seen the world burn down - the first time, in his home village, and the second time, now, in a beastmen internment camp that he figured he'd been brought to die. Natalia was also there with him. Shirou sees the wolf god - Ginrou in what he assumes to be a dream - but it turns out not to be, Ginrou has come to save them. He sees Ginrou standing atop the rubble. 'The silver wolf was crying.'[1]

A long time ago, there was a Second World War between human nations, set in BNA's world. During this, Natalia was living in a village deep in the forest. In this village, she was in an internment camp, where scientists performed experiments on her, because their country was weak compared to the other combatants, and so turned to harness the power of animal people. But then, the camp was liberated by Ginrou. Still, the dead were not brought back to life, and the animal people had no home to return to.

After the liberation, Natalia sees that the sky is blackened with ash, due to the country, somewhere in the countryside of Europe, still being part of the war. During this scene, it's mentioned how Natalia is in her early teens, and how she had lost sight of her family and the people from the village while in the camp. She then, says she's hungry, but her companion, Shirou, tells her that if she has pride as an animal person, she will preserve against hunger. Natalia then mentions how the next town might have a soup kitchen. Natalia also observes how Shirou looks just like the legendary Ginrou. A bit later, it is revealed that Shirou has his crow, Kuro with him. He tells Kuro not to land on his hand because that will get mud on him.

They then find a small town, apparently on the winner's side of the war. Natalia mentions it is beautiful, and how it remembers her of her hometown. Shirou rebukes her by asking why she would say that about a human town. Apparently, Natalia respected humans, and animal people that avoided anything to do with humans and human society were very rare. In her village, the other beastmen told her to avoid reading human books, but the village head, who had once lived among humans, encouraged her and told her she was a clever girl. Natalia grew to hate other animal people. aside from the village head. The day the village burned down, she heard the cries of the village residents that she hated. She rejoiced at the end of that closed off-world and awaited getting closer to humans.

In the town, Natalia obtains food and offers half of it to Shirou, but he refuses to eat it, saying he wouldn't accept anything that comes from humans. She then, gives him her half, since then it would come from an animal person. Shirou reluctantly eats it while she goes hungry. Meanwhile, they hear some lovely music, and Natalia thinks that humans are, in fact, amazing.

During this, some soldiers on leave appear. They were talking about their battlefield experiences against animal people. One of them remarks he couldn't use his gun against them, and how they were very tough to fight against.

At the town, Natalia and Shirou meet a family of animal people called the Merry's, who would they spend that night with. They were goat type, and all the town knows that they are animal people. Natalia is surprised because she hadn't heard of something like this before. She observes that humans think animal people are a completely different species, but in truth, as all animal people are told as kids, they are a different race of humanity. In the course of evolution, animal people's ancestors gained the power to transform into the animals that they worshiped as gods. The scientists who had experimented on Natalia didn't understand this, thinking that each type of animal transformation was part of a different species.

The next day, in the town square, Natalia overhears some guys talking about how the Merry family are animal people. They blame the Merry's for releasing some livestock outside the town. In the square, the men suggest to the crowd assembled for the daily distribution of food that traitors and collaborators with the enemy nation are in their midst. The crowd then becomes hysterical. Natalia and Shirou leave to protect the Merry family. Shirou says to the Merry's: "Don't worry, I will without fail protect animal people", and proceeds to turn into his wolf form.

Based on a plan Natalia came up with, Shirou uses the livestock to chase away the townsfolk, with him in the role of a sheepdog. Natalia thinks to herself that the human townsfolk are dumb enough to believe that the Merry's could become goats and lay waste to the fields, which obviously couldn't happen, since animal people can't perfectly become animals, with the sole exception of Shirou Ogami. This is another thing scientists couldn't understand.

After the group escapes to a forest outside the town, one of the ringleader men from earlier finds and confronts Natalia, and accuses her of assisting the goat family. But then, Shirou turns up and quickly defeats the men. Natalia thinks he had killed the man, just like he killed all the humans working at the internment camp. But Shirou spares the man's life and tells him, " If you lay a finger on animal people, the wolf will come.", and then with one hand, throws him aside. Then Shirou turns back into human form. Natalia wonders why Shirou didn't turn into Ginrou, to which he tells her "I can no longer become Ginrou.". She would understand what this meant later. In the end, the goat family was all safe, and Natalia resolves she wants to help Shirou and save animal people.[2] 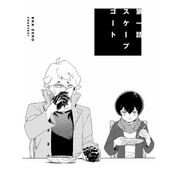 Retrieved from "https://brand-new-animal.fandom.com/wiki/BNA_-_Zero:_Beasts_That_Can%27t_Become_Even_Better?oldid=5433"
Community content is available under CC-BY-SA unless otherwise noted.